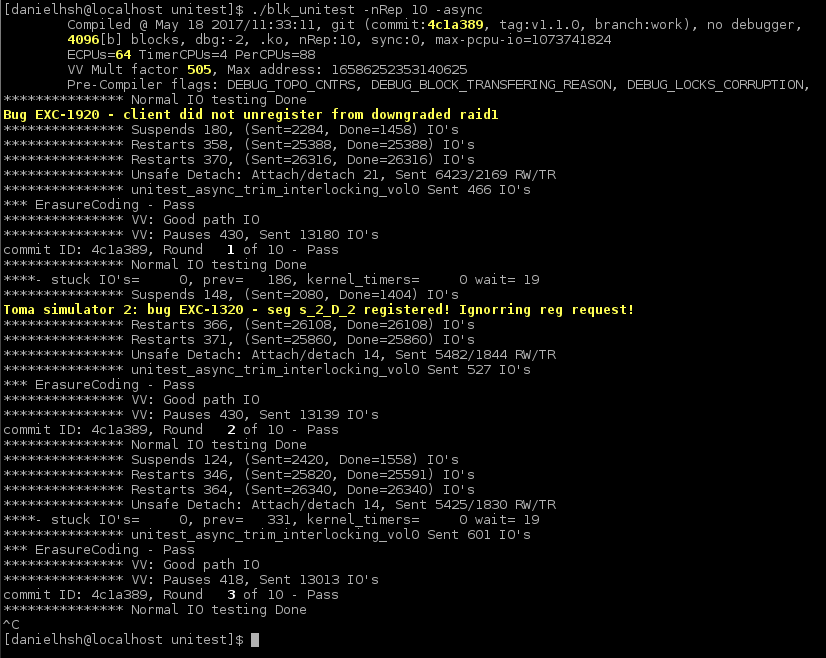 In the above image you see 3 iterations of full a unitests suite of data services. Each iteration takes about 4-5 seconds to complete. The simulated environment had 64 cpu’s on client and 24 targets, each having 1 disk. All the block devices used 4K blocks. The Unitest suite reproduced 2 known bugs of low priority. In the first iteration, one of the tests randomly restarted servers 370 times while sending ~26K ios to disks

Developing distributed algorithms is not particularly easy. Doing it in the kernel instead of in user space is even harder. Chasing low probability race conditions which cause data corruptions is just madness.

Our solution to this problem is extensive testing using user space simulators. Here are the basic steps we are using for this:

To summarize the above: our unitest environment is designed for extensive testing, provides full power of user space debugging and guarantees that our customers will receive the highest possible quality data services.

Interesting Note: the testing mechanism I described above is used in the R&D teams and each commit passes countless amount of test cycles before it is submitted to QA team. Thus, QA engineers are relieved of dealing with trivial bugs and can concentrate on the extremely difficult test scenarios.